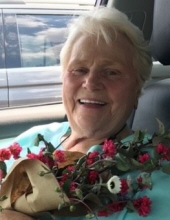 Priscilla was born to Paul and Marie (Chamberlin) Bowman on November 20, 1940, in the house her father built near Hagerstown, IN. She was the third of their 12 children. Priscilla was a graduate of Hagerstown High School, Class of 1958. She also graduated with a certificate in Medical Secretarial from Ivy Tech in 1982.

On August 26, 1961, she married the love of her life, Edwin Alvin Davis, from Sheridan, IN. Eddie and Priscilla had seven children. She was a devoted mother and homemaker. After Eddie’s passing in January 1974, Priscilla continued raising their children with prayer, strength and trust in the Lord. All seven of her children have become responsible, productive members of society through her influence.

Priscilla was preceded in death by her handsome and loving husband, her parents, two of her devoted siblings, Kathryn Pierce and Virginia Bowman, and by a much-loved daughter-in-law, Gene’s wife, Terri Sue Davis. She is survived by her seven children: Jay Davis of New Castle, Galen (Valerie) Davis of Jasper, MO, Maria (Ralph) Berthiaume of Pendleton, Gene Davis of Richmond, Thad (Sara) Davis of Green Forest, AR, Lois (Troy) Todd of Indianapolis, and Ceci (Glenn) Houchins of Knightstown. Her descendants also include 22 grandchildren, 9 of their spouses and significant others, and 17 great-grandchildren.

Priscilla loved flowers, singing and cooking. She often shared her talents with others whether by making floral arrangements or hosting a meal. She had a heart for Christian missions and was a prayer warrior for her family, our nation, her friends, and missionaries around the world.

She loved her family well and never failed to tell them so. Her children rise up and call her blessed.

Participation for visitation and service may be limited due to Covid restrictions, and all participants are required to wear a mask.
To order memorial trees or send flowers to the family in memory of Priscilla Ann Davis, please visit our flower store.