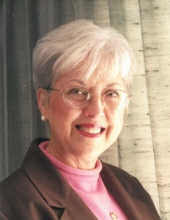 Phyllis Ann McVicker, 78, of Indianapolis, Indiana went to be with the Lord on October 10, 2020 at her home after an 8-month battle with cancer. She was born on December 20, 1941, to Estle Ryan & Norma Jean (Phillips) Dobbs in Bald Knob, Kentucky.

They moved to Indiana and lived in the Oakville/Cowan area and she graduated from Cowan High School. Phyllis then attendee Patricia Stevens Finishing School in Chicago, Illinois. She married Richard McVicker on November 11, 1961 and lived in around Indianapolis all their married lives and raised their sons, Tod, and Bryan, there.

Phyllis was the second child and oldest daughter in the family of seven children and she was her mother’s right hand. She mothered her younger siblings as her own and helped them in any way she could. She was a talented seamstress and made many beautiful clothes for herself and her children as well as items for her home and grandchildren. She was also an accomplished quilter and knitter and had many creative crafting skills. She loved to work in her garden, and she was an avid reader. She made her surroundings beautiful. She loved to travel and visited many places in the U.S. and other countries.

Phyllis worked part-time at Indiana National Bank when her boys were young and when they were older, she went to full time, rising to a position in public relations until her retirement.

Phyllis was very involved with her church and established friendships that lasted her lifetime. She enjoyed working in the MOPS (Mothers of Preschoolers) program and loved taking care of the babies. She and Richard entertained their friends at their home often and made a special effort to get to know new people at church and took them to lunch. Her philosophy of life was “Be not forgetful to entertain strangers: for thereby some have entertained angels unawares”. Hebrews 13:12.

Her family always remained the center of her life. She was very proud of her boys and their accomplishments. She referred to her granddaughters as (Darlings Girls) and traveled to Texas regularly to spend time with them all. She also maintained a lasting friendship with her siblings and tried to spend a day once a month with her sisters.

All services are private to family.
To order memorial trees or send flowers to the family in memory of Phyllis Ann McVicker, please visit our flower store.