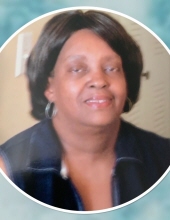 Pearl Lena Garnett, daughter of the late Arthur and Maud Garnett, was born December 4, 1955 in Indianapolis, Indiana.
Pearl L. Garnett professed a hope in Christ at an early age, where she attended New Liberty Baptist Church, Indianapolis, Indiana.
Pearl finished high school at Arsenal Tech, and went on to graduate from Beauty College as a cosmetologist; along with getting an Associate Degree in Business. Pearl worked 9 years at Indiana Bell and 5 years as a Bus Monitor.
Pearl enjoyed drawing, traveling, trying new recipes, playing words with friends and looking for ways to become an entrepreneur.
Pearl departed this life March 31, 2021 at the age of 65. Along with her parents, Pearl was preceded in death by her two sons; Aaron M. and William F. Garnett.
Pearl leaves to cherish her precious memory, her son Anthony M. Garnett, brother Sherman R. Garnett, Sr. (Elizabeth), and Mary Davis (Eric White), 5 grandchildren and 5 great grandchildren, along with a host of other relatives and friends.
To order memorial trees or send flowers to the family in memory of Pearl Garnett, please visit our flower store.