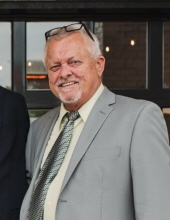 Michael Lee Wentworth left this earth on November 25, 2020 at the age of 59. He was born in Louisville, Kentucky on February 16, 1961 to Maxine and the late, Garland Wentworth. He graduated from New Albany High School and moved to Indianapolis to attend college and pursue his design and construction career. He has lived in Indianapolis ever since.

He is survived by his two daughters, Ashley and Courtney, his three precious grandchildren, Natalie, Addison and Grant, his mother, Maxine, his brother, Carlos (Elanda), sisters, Sandy and Deena, several nieces, nephews and cousins and his very close companion of 20 years, Pamela McClintic.

Mike worked in the engineering design and consulting industry for almost 40 years with BSA LifeStructures and, most recently, was working for the Indianapolis-Marion County Building Authority as an Owner’s Representative on the Citizen’s Justice Center. Mike’s primary expertise was in HVAC engineering, and over the last few years, his primary interest was in coordinating between the design and construction phases of very complex major projects like the Eskenazi Hospital.

Mike was respected for his problem-solving abilities by both the designers and the skilled tradesmen, working to achieve effective solutions which were coordinated with all systems. He was known for his no-nonsense approach to everything he did. In simple terms, he listened and then acted, always with the design intent in mind.

He was fun loving. He loved to travel to exotic locations throughout the Caribbean, always seeking new adventures, and always taking lots of photographs. He was a wonderful grandfather.