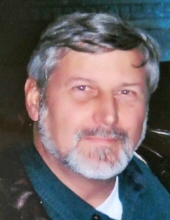 Dr. Mike Kubek III, PhD, born October 6, 1945 in Pittsburgh, Pennsylvania, died October 11, 2019 in St. Francis Hospice House, after a challenging battle with colon cancer. Mike grew up a second generation American, with his parents Anna and Michael, sisters Barbara, Kathy and Marty, in Ambridge, PA, a steel town outside of Pittsburgh. This small Steel town forged the steel for the Mackinac Bridge that would eventually take Mike across the Straits of Mackinac numerous times, and will eventually one final time for eternal rest. From an early age, his interests varied widely from model trains to the drums to science to the outdoors. In a family where his father only attended the 8th grade and his mother the 6th, he was the first to attend college at the University of Dayton. While at UD, he joined the US Army ROTC unit, and was assigned to the Chemical Corps. In 1974, he was stationed briefly as Active Duty, at Aberdeen Proving Ground, Maryland. He remained in Active Reserves until 1981, with an Honorable Discharge, at the rank of Captain. He would go on to obtain a Masters from UD; his PhD from the University of Rochester, and complete a Post Doctoral Fellowship at Northwestern University. While at the University of Dayton completing his Masters, he worked in the Blood Bank and as a phlebotomist. Here, he met a young beautiful nurse, Ginny. He recognized her compassion, and knew that she would be an amazing and caring mother. Ginny and Mike eventually wed, and moved to Rochester, NY, then to Chicago, Il, and eventually settled in Indianapolis, IN. Mike took a faculty and research position at the Indiana University School of Medicine. Here he was heavily involved in the Neuroscience program for the medical school, directed numerous graduate courses, and remained steadily focused on his research with TRH. While in his tenure, he shepherded the careers of numerous medical and graduate students. As his career continued to evolve, Mike and Ginny raised their 3 sons, Michael, Eddie and Danny, and always maintained family as their first priority. They remained active members of their St. Pius X Catholic parish for over 43 years. This past August, Mike and Ginny celebrated their 49th wedding anniversary at the family vacation home on Sugar Island, in the UP of Michigan, surrounded by his sons, their wives and 7 grandchildren. This was Mike’s last visit to his home away from home. Mike would remain an active member of the department of anatomy at the IU School of Medicine for over 40 years. He dedicated his career to bettering mankind through his research surrounding the neuropeptide TRH. This molecule would take him all across the United States, throughout Europe, Japan and Israel.
He dedicated countless hours in an effort to help those with ALS, received a grant from CURE in hopes of eradicating Epilepsy, and, at the end of his career, obtained a grant from the Department of Defense. This last project would focus on those he revered as true heroes, our nation’s Active Duty and Military Veterans. Mike continued to work, while undergoing chemotherapy, in hopes this collaborative research project would help combat the rising suicide rate in our nation’s Military, and further demonstrate the safety of TRH in adults. To this end, he dreamed that following such success would ensure his ability to help children worldwide suffering from intractable seizures. Mike was an example of determination, hard work, commitment to family and country, and one who led a life unapologetically his own. His wife Ginny; his three sons; their wives, Dayna, Choey, and Kristina, 7 grandchildren, and sisters Barbara and Marty, survive him. He will be missed, loved and remembered fondly . . . God bless. Visitation will be held at St. Pius X Catholic Church on Friday October 18 from 6-8pm, and again on Saturday morning, October 19 from 10-11, preceding the memorial mass. Following mass will be a peace meal at the church. In lieu of flowers please consider donations to either of the following organizations: Vietnam Veterans of America vva.org and CURE Citizens United for Research in Epilepsy cureepilepsy.org
To order memorial trees or send flowers to the family in memory of Michael Kubek III, please visit our flower store.