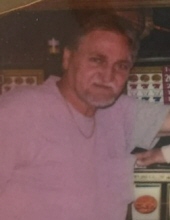 He was born Friday, May 30, 1952, to David and Mary Lou (Amonette) Wix in Indianapolis, Indiana. Michael grew up on the southeast side of Indy and attended How High School.

Michael retired from the City of Indianapolis as a Master Millwright and chief steward of the union after 30 plus years of service. He was an active fisherman, casino/poker player, and loved going to auctions to find the best deals around.

Michael was blessed with a large loving family. He was married four times, first and fourth time to the same woman, Sheila. He married his second wife Kathy Denton and together they had three children, Michael Denton, David Wix, and April Wix. From his biological children he was blessed with eight grandchildren, one great grandchild and two more on the way.

Memorial service will begin at 2:00 pm.
To order memorial trees or send flowers to the family in memory of Michael Eugene Wix, please visit our flower store.