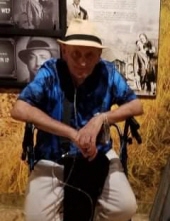 Michael Eugene Patton (A.K.A Twisted) passed away at Sidney and Lois Eskenazi Hospital in Indianapolis, IN, on October 3rd, 2021 at 7:19pm.

He was an amazing person. He enjoyed volunteering for many sporting events, including the Indy 500. He enjoyed attending the Indianapolis Pride Fest, Race for the Cure, and anything else that had to do with cancer. He beat Lymphoma cancer in 2011.He enjoyed wearing bright color of shoes and clothing (it's like his own trademark). He was a veteran in the United States Air Force.

Michael lost his life with a second battle of small cell lung cancer; therefore, he went to join his parents Mr. and Mrs. Jodie Herrington, and his brothers; Markin Patton and Tracy Herrington.

He is survived by his son, Joseph Patton, brothers; Ronald, Garrel and Phillip Herrington, sisters; Jodi Nation, Penny Brown, Linda Witt and his best friend, Lisa Wohlhuter (which his sister has adopted as a sister),and many grandchildren along with many nieces, nephews, great nieces, and great nephews.

A Memorial Celebration of his life is being planned for a later date. If you wish to make any donation, please donate to the American Cancer Society in his honor.
To order memorial trees or send flowers to the family in memory of Michael E. Patton, please visit our flower store.