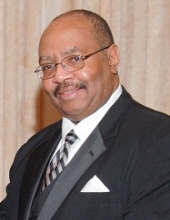 Michael D. Johnson was born to Catherine Harmon (Johnson) on May 1, 1947 in St. Louis, MO. He left the world on December 19, 2020, leaving behind wife Donna Johnson, daughter Latrice Stafford (Johnson), grandson Jason Michael Stafford, brothers Henry Harmon and Anthony Harmon, and sister Cassandra Johnson, along with a host of nieces, nephews, and friends. Michael was a loving husband and father, a hard worker, provider, and mentor to others.

Michael accepted the Lord as his savior and knew that faith in God knows no defeat.

In his early career, Michael was an Illinois state trooper before becoming a professional semi-truck driver. Before retiring he was an owner/operator. Michael loved to travel and truck driving allowed him to see all the beautiful sites.

In his free time, he liked to barbeque and have gatherings with family and friends. He enjoyed football especially the Chicago Bears, his home team. During retirement he got to spend more time with model trains which was an enjoyment of his.

The family would like to thank the caring staff at Independence Village of Avon and Heartland Hospice who looked over Michael during his final days.

He will be greatly missed by family and friends and remembered for all times.

A celebration of life will be held once the pandemic is controlled. Family will send specific details at that time.
To order memorial trees or send flowers to the family in memory of Michael Dwayne Johnson, please visit our flower store.