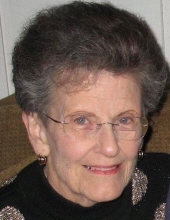 Former Traverse City resident Mary Ellen Shaffer (96) peacefully joined the choir of angels in her eternal heavenly home from Indianapolis, IN on Sunday, 9/20/20, where she resided over the past 6 1/2 years.

She and her husband, George, retired to Traverse City from East Lansing in 1986. Both were former members of First Congregational Church. George preceded Mary Ellen in death in 2008 after 63 years of marriage. Mary Ellen continued to live in Traverse City until 2014 when she relocated to Indianapolis.

A humble, gracious and classy woman, Mary Ellen devoted her life to faith, family, friends and community. Born in Perry, MI at her grandparents’ farmhouse, she served in the State of Michigan Senate over 20 years. In retirement Mary Ellen volunteered in the First Congregational consignment store over 25 years.

She is survived by sons Doug (Judy) of Southgate MI and Jim (Alice) of Indianapolis, and four grandchildren — Todd Shaffer, Troy Shaffer (Renee), Lauren (Shaffer) Query (Lucas) and Alex Shaffer; four great grandchildren (Griffin Shaffer, and Leilani, Lexie and Laiklyn Query); sister Carol Banning; and several nieces and nephews. She was preceded in death by her daughter, Christine Shaffer, in 1958.

The family thanks the devoted staff at American Senior Communities, Traditions at Solana, and Heartland Hospice Care for the loving care Mary Ellen received in Indianapolis. Memorial Contributions in Mary Ellen’s name may be sent to one of her and George’s favorite charities they faithfully supported at Starr Commonwealth, 13725 Starr Commonwealth Road, Albion, MI 49224.

A private family gravesite service will be conducted at Evergreen Cemetery in Lansing, MI at a future date.
To order memorial trees or send flowers to the family in memory of Mary Ellen Shaffer, please visit our flower store.