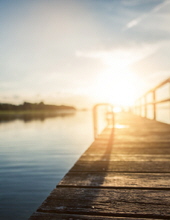 Mark P. Lugar left this world on Sunday, July 19th, 2020 leaving a rainbow streak behind him momentarily in the sky that evening. He was 60 years young, born in Indianapolis, Indiana on September 28, 1959. He was the youngest of six children to his mother, Patricia Jones Lugar, and his father, William Eugene Lugar. More than 20 years later, there was one more sibling born from his father, making him no longer the youngest child.

Mark had one child during his lifetime- his son, Mark Patrick Lugar Allison Jr. He is survived by his son and his longtime partner Denice Lugar.

Mark was an easy guy to like and always did his best to be punctual with his presence. Mark graduated from Lawrence Central High School in the late 70’s and furthered his education by taking courses at IUPUI. He was a craftsman by trade, specializing in unique tile designs with his main focus on custom showers.

In 2016 he became self-employed and began his own company, Custom Showers Inc.
Mark loved playing softball and pitching was his forte. Athleticism runs fervently in the Lugar blood line and Mark got his fair share of the gene. “At least in my younger years,” as he would say more often toward the end of his time.

Nonetheless, competition was not something Mark took lightly. It didn’t matter what game was being played or the relevance of what was at stake, nothing mattered more to him than winning when the moment came. However, if and when he took a loss, those who knew him would agree it was best recommended to give him a minute to cool off before approaching him again.

So, it was true that Mark had difficulty accepting any kind of loss in this life, but on the contrary, it gave perspective to shed light on the amount of passion this man possessed, and it showed through the progress and results of what he chose to pursue.

Mark is missed dearly, but his memory and legacy lives on through the memories and hearts of those who connected with him.

Services will be held Thursday, August 13th, 2020 at Indiana Funeral Care located at 8151 Allisonville Road in Indianapolis from 10am – 2pm, followed by inurnment which will take place at Oaklandon Cemetery located at 7100 Oaklandon Road.
To order memorial trees or send flowers to the family in memory of Mark Patrick Lugar, please visit our flower store.