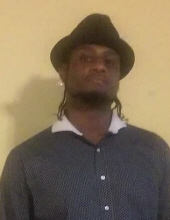 Mark Brown, passed away unexpectedly on April 06, 2021 at the age of 36 while in his home in Indianapolis.

Mark is survived by his Mom; Vernice and his Brothers; Wendell Jr, Robert, Michael; and his Nieces and Nephews. He is predeceased by his Father, Wendell Sr.

Mark was born in San Diego, California on January 03, 1985 to Vernice Brown and Wendell Brown Sr. He attended elementary and junior high school in Spring Valley, CA and High School at Broad Ripple in Indianapolis.

Mark was the life of the party and had a great sense of humor, ever since he was young. He had many talents and enjoyed singing, dancing, holistic and natural medicines and philosophy. He read many books, including one of his favorites - Art of War by Sun Tzu. He would often post inspirational messages on social media. He also loved to play the violin.

Mark will be greatly missed by all of his Family and Friends.

A memorial service is being planned for a date in the near future at St. Luke's United Methodist Church in Indianapolis.
To order memorial trees or send flowers to the family in memory of Mark A. Brown, please visit our flower store.