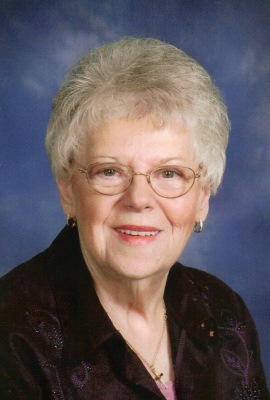 Marie Fanchon Middleton passed away in Compass Park Rehabilitation Center in Franklin, IN on March 11, 2022. She was born May 5, 1936, to the late Victor H. and Betty J. Mandabach in Indianapolis, IN.

She was a graduate of George Washington HS, Indianapolis. She married her husband, Raymond E. Middleton on June 27, 1953. She was a member of Gray Road Baptist Church since 1977. She was much loved by all who knew her as a mother, grandmother, sister, aunt, and friend.

Marie had a long career in various retail stores, Topps, Jos. Guidone's Thrift-T-Mart, and most recently Cracker Barrel, where she had the distinction of being the oldest employee in the entire company. She was also very involved in Girl Scouts, not only as a troop leader, but she also served as chairman of the Woodland neighborhood Girl Scouts.

She developed a passion for oil painting in 1978 and in 1981 she became a partner in The Back Door, a shop that specializes in quilting supplies of all kinds. But more importantly to Marie, at that time they also carried art supplies in abundance and offered various art classes. She soon began teaching art classes and developed a group of devoted students. In 1991 she sold her share of The Back Door and opened her own art studio. The Village Art Shoppe, located in Old Towne Greenwood, was where she painted and taught classes until 2001. After the death of her husband, Raymond, she moved her studio to her home and continued teaching until 2019, when she sold her home and moved into an apartment. After moving into her apartment, she didn't lay down her paint brush. She continued painting daily. She had several friends who enjoyed her company and would often come to share her art table with a project of their own. She was still painting this past Christmas and was able to complete numerous gifts for all her family members and several friends.

She was a former member of the Southside Art League, Indy Decorative Artists and the Old Towne Greenwood Association. For several years Marie entered her artwork into competition at the Indiana State Fair, where she won numerous awards, including the Shirley Thompson Moreau Award of Excellence, the top honor among all 22,000 art entries in the Home and Family Arts Building in 1995.

She was preceded in death by her husband of 47 years, Raymond Middleton; and her sister Adrienne Moore

Memorial contributions may be made to Gray Road Baptist Church, 5500 South Gray Road, Indianapolis, IN 46237. Visitation will be held Wednesday, March 16, 2022 from 2:00 pm until the time of service at 5:00 pm at Indiana Funeral Care - Greenwood Chapel, 2433 East Main Street, Greenwood, IN 46143.
To order memorial trees or send flowers to the family in memory of Marie Fanchon Middleton, please visit our flower store.