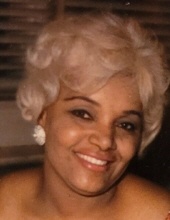 Magnolia Nelson was an only child born on March 22,1927 to Samuel Lewis and Margaret Bell Nelson in Birmingham, Alabama.

Magnolia grew up in the hills of Lynch, Ky where she received her primary and secondary education and developed a passion for reading. After high school she left Kentucky to attend college in Chicago, Illinois.

Magnolia found her flare for vogue and design while in Chicago. Her picturesque style attracted the attention of local agents and photographers, allowing her an opportunity to do freelance modeling. Magnolia’s flawless skin, blond hair, facial beauty mark, and electric smile were her trademark in the fashion industry.

Magnolia blossomed, met, fell in love, and married Charles Honeycutt in the Heights of Chicago. To this union 3 children, Yvonne, Charles, and Samuel were born and raised.

Magnolia was a firm believer of descent and in order and wanted everything to be in its rightful place. Her stern yet loving spirit opened her home to family and friends for social gatherings and open dialogue to the wise and naive, allowing you to leave with a full stomach and food for thought.

Magnolia later moved with her family to Indianapolis and began working as a Socialite for several black owned businesses as well as with the Hyatt Regency.

Magnolia was a faithful member of New Light Baptist Church for many years under the teaching of Rev. Robinson. As life progressed Fellowship of True believers Baptist Church, Pastor Gregory Eastling had church with Magnolia in her home to read the Word, praise, worship, fellowship, and have communion.

Magnolia left this earth to be with the Lord at the youthful age of 94 years, on Wednesday, June 16, 2021. She is preceded in death by her daughter Yvonne Bradford and son Samuel Nelson

Magnolia Nelson’s family would like to extend our heartfelt gratitude to everyone for their kindness, thoughts, prayers and condolences.
To order memorial trees or send flowers to the family in memory of Magnolia Nelson, please visit our flower store.