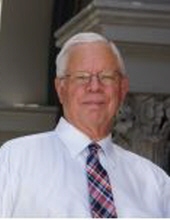 Lynn Hopkins Molzan, of Tacoma, Washington, passed away in Indianapolis, Indiana, on October 29​th​ 2020 at 82 years of age. Lynn was a graduate of the University of Washington, and held a Masters Degree in Architecture from the Pratt Institute in Brooklyn, New York. He went on to have a long and distinguished career as an architect in his adopted hometown of Indianapolis, Indiana. Due to the impacts of the COVID-19 pandemic, no memorial service is planned at this time. In lieu of flowers, the family humbly suggests donations in Lynn’s memory to Herron High School in Indianapolis (​https://www.herronhighschool.org/give/​) or The Old Northside Foundation (​https://www.oldnorthside.org/donate​). Cards may be sent to Merrie Molzan, 1451 N. Delaware St., Apt #1, Indianapolis, IN 46202.

Lynn was passionate about, and dedicated to, his work and continued to contribute to architectural pursuits up until his passing. He started his career with Evans Woollen and Associates in 1965, became a partner, and in 1982 the firm was renamed as Woollen, Molzan and Partners. He was actively involved until the firm was closed in 2011. “Notable examples of the firm's work in Indianapolis that are among the city's most significant modern-style buildings include Clowes Memorial Hall, the Minton-Capehart Federal Building, the White River Gardens Conservatory, the west entrance and atrium addition to The Children's Museum of Indianapolis, and the Indianapolis Public Library's Central Library addition.” (​wikipedia​).
Lynn received many architectural service awards throughout his long career. He became an American Institute of Architects (AIA) Fellow in 1980 and in 2017 he received the AIA Indiana Gold Medal, the highest honor that AIA Indiana can bestow on an individual, recognizing “significant accomplishments in promoting the aesthetic, scientific and practical excellence of the profession; advancing the science and art of planning by advancing the standards of architectural education, training and practice; coordinating the building industry and the profession of architecture to insure the advancement of the living standards of people through
their improved environment; and making the profession of ever-increasing service to society through service to the AIA”.

Lynn was equally passionate about the city of Indianapolis; adding his significant expertise in deep and philanthropic ways to support and preserve historic places and spaces in the city. He contributed meaningfully to both Herron High School and the Old Northside neighborhood of Indianapolis. Lynn was also an avid woodworker creating many unique pieces, and in more recent years, he found great joy in creating collages with found and collected materials. Architecture, modern art and design were true passions.

Lynn was a faithful friend and often spent all day, every Sunday, on scheduled calls with family and friends located across the US. He loved to eat seafood, and travel to new places. And even when he traveled to familiar places he enthusiastically sought out local, new experiences. He was most at peace when he was walking on a beach, any beach really, and he held most dear the coast of the Pacific Northwest of the US.
To order memorial trees or send flowers to the family in memory of Lynn Hopkins Molzan, please visit our flower store.