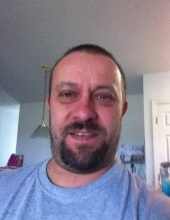 Lee Michael Whisman, 46, of Wilkinson, Indiana passed away October 11th, 2020 at Hancock Regional Hospital. Lee was born May 13th, 1974. He was survived by his parents Kathy Branscum of Wilkinson and Larry Conley of Shirley. He is also survived by his long time girlfriend Gretchen Duncan of Greenfield, her son Oliver Brubeck of Muncie and Lee and Gretchen’s daughters Avery and Saige Whisman. Along with his brother Scott and his wife Teri of Anderson their daughters Katelyn and Melissa and their son Dallas there is a multitude of loving Aunts and Uncles, cousins, other family and friends. He is preceded in death by his Step Father Ronnie Branscum, both Grandfathers Robert Coomer and Estes(Eck)Conley and his Grandmother Myrtle Coomer.

There are no formal services scheduled at this time but graveside service for family and a Celebration of Life Memorial are being planned.
To order memorial trees or send flowers to the family in memory of Lee Michael Whisman, please visit our flower store.