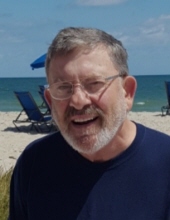 Kevin Linder Ragan, 65, of Indianapolis, was surrounded by family when he peacefully passed away of cancer on Saturday, March 19, 2022, at Eskenazi Hospital.

Kevin was born in Bloomington, Indiana, and grew up in Indianapolis. He graduated from Arlington High School in 1975. Kevin was an active member of the Neighborhood Fellowship Church where he helped prepare meals for the school children and worked in the food pantry. He firmly believed in prayer and could be counted on to hold up family and friends at all times of the day and night. Kevin was a Mason in Speedway Lodge 500. He was an AA group leader for many years. He was an Eagle Scout. Keeping a connection with family was important, and Kevin regularly traveled to nurture those connections – going as far away as Australia.

Kevin always had a job. In his youth, he had a morning paper route, and he and his brother Paul had a thriving lawn business. Later, Kevin worked in hospitality where his responsibility, genuine interest in others and insistence on quality service were valued by staff and customers alike.

Kevin is survived by his brother Paul Ragan (Dori Beachler) of Indianapolis; his sister Sheryl Linn (Jim) of Davie, Florida; his brother Mark Ragan (Anita) of Beech Grove; and his brother Gregory Ragan (Dina Coder) of Plainfield. He was the beloved uncle of Abigail Linn (Jon) and children Lily and Connor; Barbara Linn (Amit) and baby Rose; Sam Linn (Alexa); and Morgan Coder (Ethan). He was preceded in death by his parents Roy Ragan and Margie (Lowdermilk) Ragan Ray.

A service was held March 21st for immediate family and a Celebration of Life will be held at a later date in Indianapolis. Memorial contributions or condolences to the family may be made/sent to the Neighborhood Fellowship Church, PO Box 11284, Indianapolis, IN 46201.

To order memorial trees or send flowers to the family in memory of Kevin Linder Ragan, please visit our flower store.