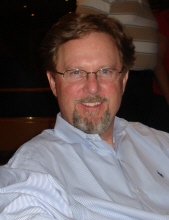 Kevin Billingsley, 63, passed away on December 12, 2019, after a two-year battle with cancer. He died peacefully at his home in Fishers, Indiana holding his wife’s hand. He was born March 17, 1956 in Muskegon, Michigan to Jerry and Muriel Billingsley of Spring Lake, Michigan. He married his best friend, Brooke Welling, on August 26, 1983, and they were married for 36 years. Together they had two sons, Ryan (Anna) Billingsley and Jordan (Ally) Billingsley, and two beautiful granddaughters, June and Eve all living in Fishers, Indiana. He is also survived by his one brother, Jeff (Lisa) Billingsley of Muskegon, Michigan and several nieces and nephews.

Kevin graduated from Michigan State University in 1979 with a degree in Education and English. He started his career teaching high school English and later moved on to public relations and marketing working for the City of Muskegon, NBD Bank, Lincoln National Bank, and finally moving to healthcare at St. Joseph’s Hospital in Fort Wayne, Indiana serving as the Vice President of Marketing. It was while at St. Joseph’s that he and his wife had the idea that would launch a 21-year venture in healthcare market research, Perception Strategies. He authored a book, ‘Turn Your Customer On,’ among many other projects always with the goal of improving the patient experience in healthcare.

Kevin loved golf and began playing the game when he was 12 years old. He loved being out on the course and would invite his sons, family, and friends to join him to share in a round. He served as the commissioner of the Fort Men’s Club for 10 years where he and 50+ guys played golf every weekend each season, organizing tournaments, and trying to make the league fun for everyone. He had a seven handicap and was always striving to improve his score.

He was also a die-hard Detroit Tigers fan. He was often convinced he could, by simply viewing a game, change the course of events, despite being over 250 miles away from Comerica Park. Just like with golf, he shared this love with his family, planning trips to Spring Training in Lakeland, Florida or making the long drive to Detroit for a day game.

Besides sports, he loved music. He loved going to concerts with his wife and sons. He would tell stories of all the amazing shows he saw while he was at Michigan State University and would always know when even the most obscure act was coming through town. Late at night, in his office, you could hear him playing anything from Steely Dan to Mahavishnu Orchestra, the music echoing around the former WWII nursing building.

Kevin loved his family and enjoyed traveling, going on trips around the country and around the world. He was an active member of Northview Church in Carmel and always willing to volunteer to help others. He went on a mission trip to Haiti when his cancer was in remission to help at an orphanage.

Kevin was a quiet man who was kind and caring. He was a generous person who helped many people anonymously. He loved to sit with his granddaughters and tell them stories of the adventures of “Pastor John” and “Robber Rob,” with new characters being created and woven into the ever expanding narrative, the girls committing every single detail to memory.

A celebration of life will be held in the chapel at Northview’s Carmel Campus, 12900 Hazel Dell Pkwy, Carmel, IN 46033 on Tuesday, December 17th, 3:00pm. Visitation will be from 1:00 to 3:00pm.
To order memorial trees or send flowers to the family in memory of Kevin Billingsley, please visit our flower store.