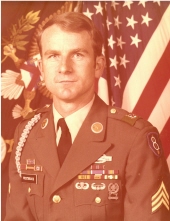 He was born on Tuesday, December 9, 1947 to the late Lawrence and Josephine (Mattison) McRorie in Sault Ste Marie, Michigan.

Kenny served 22 ½ years active duty in the US Army. He served in Vietnam from December 1967 until November 1968. After leaving the service he and Susan started a deck building business. They built decks all over Indiana. They also built decks for friends and relatives in Colorado, Tennessee, Florida, and Hawaii. He enjoyed creating something beautiful and useful and always gave his best efforts to everything he did.

Kenny’s building talent was shared with others as he served with Servants of Our Savior (SOS), an RV ministry, after Katrina. He volunteered with International Disaster Emergency Services (IDES) in Henryville, Indiana after the tornado hit there.

Kenny will be remembered for his strong work ethic, fierce Patriotism and his love of God, family, and country.

Memorial service will begin at 1:00 pm.

Burial of cremated remains to follow immediately after service.
To order memorial trees or send flowers to the family in memory of Kenneth S. Westbrook, please visit our flower store.