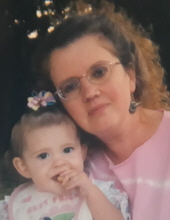 Karen Sue Bandonis (nee Jackson), age 66, died in her home in Indianapolis on January 23, 2022. She passed away after a four-year battle with multiple myeloma. Despite frequent medical complications, she always looked ahead with optimism and grace.

Born in Indianapolis, she graduated from Franklin Central High School in 1973. She moved to Portland, Oregon in her early twenties and spent much of her adult life on the west coast. She eventually settled in Newport, Oregon, right next to the ocean she so loved. She worked in healthcare for many years, both as a medical assistant and, later, a transcriptionist. She wrote short stories, sewed intricate quilts and baby clothes, crafted delicate beaded artwork, and knit beautiful wool hats for nearly everyone she knew. A phenomenal mother, her creativity was surpassed only by her devotion to her children.

She spent the last chapter of her life in Indianapolis in order to care for her mother, Nancy Truex Jackson. Her mother preceded her in death, as did her sister Valerie Jackson. She is survived by her children, Joshua (Kathie) Goodpaster and Molly Bandonis; grandchildren Jared Goodpaster and Kiera (Travis) Winslow; and great-grandson Mason Winslow. She is also survived by her sister Lisa Jackson.

Funeral services are private and for immediate family only. Those wishing to honor her life can make a donation in her name to Horizon House or Wool-Aid.
To order memorial trees or send flowers to the family in memory of Karen S. Bandonis, please visit our flower store.