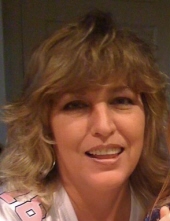 Julie Shae Tuck Middleton, age 56, of Fortville, died peacefully in her sleep of a heart attack on
Friday, December 4th, 2020. Julie was born May 21st, 1964 in Anderson IN to Earl Eugene and
Linda Ann (Miller) Tuck. She attended Mt. Vernon High School in Fortville and retired from
professional life while running the office of P & A Machine Co. with her long time partner, Andre
Coffey.
Julie made friends wherever she went. She had an infectious laugh and kind heart. She would
go out of her way to help friends who needed anything from her. Those who know Julie, know of
her unwavering love for her children; daughter, Miriah Nichole Scruggs, and son, Michael Sean
Middleton. Growing up, she never said no when they brought yet another animal home, and
sometimes she was the one bringing the strays home herself. When Sean was young and got
into skateboarding but didn’t have a safe place to ride, Julie went to town meetings and set the
ball rolling on the skate park that now sits in Memorial Park in Fortville. Nikki always knew that if
she had to get something off her chest, all she had to do was call her mom. She would probably
laugh, tell her not to talk like that, and then say that she loved her anyway.
Julie’s real pride and joy was her granddaughter, Phoenix Nichole Hull. When Phoenix was
born, everyone else ceased to matter. She stopped watching Judge Judy, the Real Housewives
called to ask where she went, and the Colts started losing. She loved to share pictures of
Phoenix and videos of her singing to anyone who would listen. Her pride was astounding. Being
Phoenix’s Grammy was the most important title she ever earned, and she treasured every
minute they had together.
In addition to her children and granddaughter, Julie is survived by her mother, Linda Johnson;
sisters, Joani (Matt) Jenkins and Jacqueline (David) Leonard; brother, Jason Tuck; nieces
Ashley and Abby Jenkins, and nephews Ben Spangler and Jonathon Leonard. She was
preceded in death by her father, Gene Tuck.
A private family memorial service will be held at a later date. Memorial contributions can be
made to the Wheeler Mission at PO Box 3085 Indianapolis, IN 46206, or online at
https://wheelermission.org/donate-to-wheeler/ . Julie always wanted to volunteer at Wheeler
Mission during the holiday season, so her children thought this would be a fitting way for friends
and family to honor her.
To order memorial trees or send flowers to the family in memory of Julie Shae Middleton, please visit our flower store.