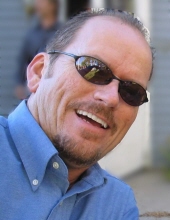 Joe worked many of years in the corrugated box manufacturing as a draftsman and salesman at Pentek and Systec. In his later years before he retired, he worked in Murphy’s elevator as a salesman. But his best job and successful job was a husband and a father and papaw.

He was very artistic, he loved to draw and build things,and loved remodeling when he retired. He took up a craft drawing on old saws and using a plasma cutter to cut them out. He really enjoyed that and selling them. He always had love for his family, wife, children, grandchildren, nieces and nephews, and friends. He loved of all cars. His last one that he had was a 72 little red Corvette but because of the stupid cancer he had to sell it because he couldn’t drive it anymore and he didn’t want it just to go to any one. The guy that bought it had the same love of corvette's as he did. We loved to just ride in the country for hours, and going to flea markets. He loved animals especially Layla, she made him laugh ...crazy dog. And again, before the stupid cancer he loved to eat a good steak or a good hamburger.

He is preceded in death by his parents, Carl, and Mildred Coomer; brother’s, Carl Michael Coomer and wife Karen, Donald B. Coomer and wife’s Mary and Kim; sister’s Verna L. (Coomer) Ott and her husband Bill, and Anita A. Coomer.

Funeral service will begin at 1:00 pm.