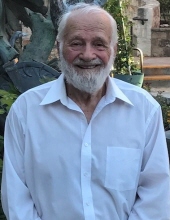 John Marmureanu passed away on Thursday, October 22, 2020. He was 92 years old. Born on May 31, 1928 in Romania, he emigrated to the United States in 1970 asking for political asylum, escaping the Communist regime at the time.

Educated man in classic literature and having a law degree, he had to start from the bottom in this country having odd jobs in New York City until he could enroll at St. Vladimir Seminary and get a Master of Divinity degree. He was ordained as an Orthodox priest in 1972 and retired in late 1980’s.

John loved the outdoors, especially gardening and working with his hands; and also loved to debate philosophy and world politics. He believed that his biggest accomplishment was bringing his immediate family to the U.S., the land of opportunity and personal freedom.

There is no visitation service at Indiana Funeral Care off Allisonville Rd. The funeral service will be held Monday October 26th at 11 a.m. at St. Constantine and Elena Orthodox Church in Indianapolis, Indiana, followed by burial at Oaklawn Memorial Gardens. The public is invited, provided that CDC Covid-19 protocols are followed during the service and burial. Donations are being accepted in his memory by the church at http://saintsconstantineandelena.org/
To order memorial trees or send flowers to the family in memory of John Marmureanu, please visit our flower store.