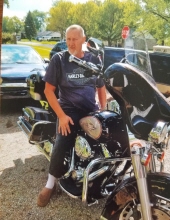 John Lewis Sullivan, 62, of Greenwood, Indiana passed away on Saturday, April 3, 2021 at his home in Greenwood.

He was born on Wednesday, October 15, 1958 in Indianapolis, Indiana to the late Norval and Pearl (Peters) Sullivan.

John loved hunting, fishing, riding his Harley and cooking. He was a home body and loved spending time with his grandchildren, family, and his dogs, Rocky and Shelby. One thing he always wanted to do was take a family camping trip but was never able to.

He is preceded in death by his parents, Norval and Pearl; sister, Rosemary Booker; brother, Jimmy Sullivan; nephews, Ricky Booker and Nicholas Bracken.

Visitation will be Sunday, April 11, 2021 at Indiana Funeral Care, Greenwood Chapel from 11:00 am until 1:00 pm.
To order memorial trees or send flowers to the family in memory of John Lewis Sullivan, please visit our flower store.