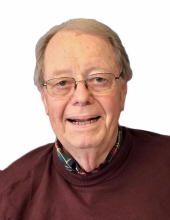 JOHN KENTON NEWTON
John Kenton Newton, 85, of Greenwood, IN, and formerly of Indianapolis, IN and Sanibel, FL passed away peacefully on August 30, 2020.
John, the son of L.E. and Mildred Newton was born on December 15, 1934 in Romney, West Virginia. He survived his twin Lewis Aaron Newton (12-15-34 to 12-15-34) and joined an older brother, Richard Newton (10-3-32 to 11-21-16). The family lived in Moorefield, West Virginia for 11 more years, until 1945. John was nine when the family welcomed a younger brother Philip Newton. The three boys formed an unbreakable bond lasting their whole life. The family moved to Edinburgh, IN in 1945 where John’s father joined the management of Hill Brothers veneer company. John’s fond memories of growing up in Edinburgh were lovingly shared with his children and grandchildren – perhaps the most infamous was his skill at deboning chickens, honed through timed competitions with his life-long friend Lee Waltz at the Waltz family grocery store. Even in his last years, as his ability to communicate was fading, John recounted stories of the Model A Ford he restored in a Hill Brother’s warehouse, and drove up and down State Road 31 for visits to Franklin and Trafalgar (did you know that’s Raglafart when spelled backwards? We still laugh at that today!).
John graduated from Edinburgh High School in 1953 and then attended Butler University where he became part of the Sigma Nu fraternity. He then went on to graduate from Indiana University obtaining a degree in business. His fraternity brothers became longtime friends, and their families joined for vacations, sporting events, New Year’s Eve celebrations, and eventually weddings and baby showers as their children grew. A lasting gift to the children of these fraternity brothers are the lessons of support and friendship that grows through the years.
A mutual friend at Butler University introduced John to the love of his life, Paula Joyce Silberman, a member of Pi Beta Phi sorority. The two made a glamorous couple attending fraternity and sorority events, were engaged, and married on April 23, 1960 at First Presbyterian Church in Indianapolis. The couple settled in South Bend, Indiana, while John worked for Polygon Plastics in Walkerton, IN.
During this time John also was enlisted in the Air Force Reserve and served during the Cuban Missile Crisis in October 1962. John and Paula’s only pet was acquired during this time, a cat named Oscar, meant to keep Paula company while John was called on duty.
He then went to work for Ford Motor Company in Indianapolis, IN where he worked for 36 years, retiring in 1997. An expert at getting to know people, John excelled at sales, traveling across the Great Lakes region for years. A highlight of his sales career included providing Indiana State Police their trooper cars – an added perk of which was police escort into the Indy 500! While traveling for work, John was known to drop in on his children at college, occasionally joining a class or evening out with college friends.
After retirement, John and Paula settled in Sanibel, Florida. Always a contributor, John served on the Atrium Condo Association Board for 16 years, 10 of which as president. His skill at fixing almost anything broken was well used, and he reveled in taking care of projects large and small around the Atrium grounds.
John dedicated himself to service in a consistent but quiet manner. He was a Mason (since 1976) and a member of the Scottish Rite and Murat Shrine. He was also a member of the First Meridian Heights Presbyterian Church, serving as deacon and other leadership positions. He supported Big Brothers, mentoring young men for many years.
John enjoyed golfing and fishing with many family and friends. He and Paula traveled throughout the world, joined by friends from many stages of life. He also enjoyed spending time with his four grandchildren – Lucy and Kenton Newton and Harrison and Mackenzie Rau. He “never met a stranger,” and could “talk the birds down out of the trees.” He kept Paula and his family busy with projects -- many of which involved cleaning something! Always known as frugal, he could spend all 100 pennies of a dollar and still get change. But mostly John is remembered for his love a good joke, staying close to family, and making sure the next generations of family knew they were loved.
John is survived by his son David Newton (Kathy) and daughter Susan Newton (Chris Rau) and his four grandchildren.
He is also survived by his younger brother Philip Newton (Jane) as well as numerous nieces and nephews.
In lieu of flowers, please honor John with a donation to the Epsilon Mu Chapter of the Sigma Nu Education Foundation (PO 1860, Lexington VA 22450) or the Alzheimer’s Foundation of America (alzfdn.org).
To order memorial trees or send flowers to the family in memory of John Kenton Newton, please visit our flower store.