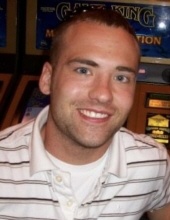 John Edmund McKinley, 36, of Indianapolis passed away on June 7. John was born on February 16, 1985, in Indianapolis. John was a natural athlete. He attended Warren Central High School where he was a varsity member of the wrestling and soccer teams. He went on to attend IUPUI where he graduated with a finance degree. After college, John worked at both AUL and with his sister and step-dad in their real estate development business.

John is preceded in death by his father Edmund McKinley; He is survived by his mother and stepfather Janet and Jim Higgs, his siblings Aaron (Michelle) Word, Daniel McKinley and Anne McKinley. A remembrance service will be held at 1:30 with an open house from 2-5 at the Sycamore Springs community room (off Dean Road and 82nd) on Saturday June 12.
To order memorial trees or send flowers to the family in memory of John Edmund McKinley, please visit our flower store.