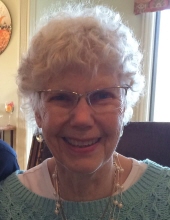 Born in Jamaica, N.Y. on April 12th, 1934, she was the daughter of John and Gertrude Lindstrom.

In June 1955 she married Donald C. Griesel, who preceded her in death. She is survived by two children, Nancy V. DellaValle and her husband Paul of Verona, N.J. and Karen J. Miller and her husband Curtis of Carmel, IN. She was a devoted grandmother to six grandchildren, Genine, Dominick (Amanda), Dayna, Alexander, Cassandra, Griffin and one great grandchild Jackson.

Joan was a 1955 graduate of Gettysburg College with a BA in Mathematics. She was a devoted wife and mother while also employed at Chrysler Credit. Retiring at an early age gave Joan and Don the opportunity to travel the U.S. while visiting many National Parks.