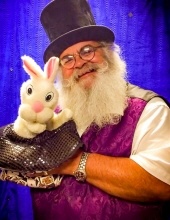 Jerry Foley, 61, of Franklin, Indiana went home to be with Jesus on July 26th, 2020. Jerry was born on October 11th, 1958 in Martinsville, Indiana. He served for the U.S. Army and National Guard for 12 years after graduating high school. He was a member of the Gateway Cowboy Church in Trafalgar Indiana.
Those who knew Jerry couldn’t help but smile whenever they were around him. He lived his life to bring joy and happiness to everyone he met. He was a member of the Hoosier Santa’s and spent every Christmas season for the past several years entertaining families and children through holiday cheer as Santa Claus with his wife Stacey And daughter Kristi. When Christmas season was over he spent the remainder of the year performing magic shows and balloon twisting at birthday parties all over the state. He performed some the of most amazing magic tricks and always made sure to include ways to share his love for Jesus in them as well! When asked “How did you do that?” His response every time “Very Well!” He was also a member of the Fellowship of Christian Magicians.
He was preceded in death by his mother Barbara Richardson and his father Marvin Foley. He is survived by his wife Stacey Foley, Daughter Kristi Foley, sons Kyle and Toby Foley, sister Tammie Smith, stepmother Nancy Foley, two stepsisters Stephanie Marshall and Twyla Manning, and several nieces, nephews, aunts, uncles, and cousins.
Thank you Jerry for all the joy you have brought everyone. We only hope heaven enjoys your magic shows as much as we all have!
Services are pending at this time.
To order memorial trees or send flowers to the family in memory of Jerry Glenn Foley, please visit our flower store.

Gateway Cowboy Church of the Nazarene

Gateway Cowboy Church of the Nazarene