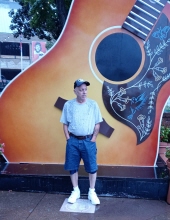 Jerry was a hard worker whose main focus during his lifetime was to provide and care for his family. He was a good, supportive husband and father first and foremost. In his spare time, he enjoyed watching football. Although him and his brother were long-time Peyton Manning fans, the Dallas Cowboys was his team and Dak Prescott, #4, was his favorite quarterback! Jerry worked for Kroger Grocery stores for 27 years; he stocked frozen foods near the end of his career. He was a supporter of the U.A.W., an American labor union that represents workers in the United States and Canada; and was a dedicated member of the United Food and Commercial Workers Union (U.F.C.W.) local 700.

To order memorial trees or send flowers to the family in memory of Jerry Allen Rusie, Sr., please visit our flower store.