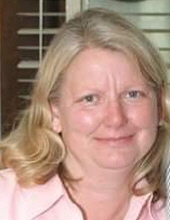 Jennifer (Jenny) Louise Ikerd-Watters died unexpectedly on August 14, 2020 in Indianapolis, Indiana at the age of 63.

Jenny was born in Beach Grove on August 11, 1957. She graduated from Indiana University in Bloomington in 2015 with her Bachelor’s Degree in Social and Historical Science. She had her son (Nathan), in 1991 in Indianapolis, Indiana and married her husband, Bill in 2001 in Hayes, Montana, both whom she loved very much.

Jenny was a lover of life and animals. She loved to read and learn. You could find her enjoying a great book out in a park somewhere in Indianapolis. Jenny was an entrepreneur, having many different careers throughout her life. She was fortunate enough to travel to many different places around the United States, her favorite being Montana, where she wished to retire.

Jenny was a devoted Christian and most recently became a member of the Faith Church in Indianapolis, Indiana.

Jenny’s family said a final goodbye in an intimate private ceremony on Wednesday, August 19 at Indiana Funeral Care. A celebration of life will be held at a later date.

Donations can be made in memory of Jenny to Indiana Humane Services at humaneservicesin.org.
To order memorial trees or send flowers to the family in memory of Jennifer Louise Ikerd-Watters, please visit our flower store.