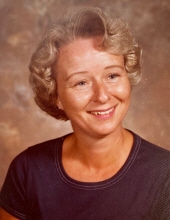 Jean Browning Rose went to be with the Lord on November 5th, 2020. She was born in Huntington, West Virginia, to Dr. Richard and Marian Browning on July 30th, 1936. Jean was a gifted student in high school and a talented gymnast and majorette. She went on to receive her Bachelor’s in English from Marshall University. Jean later married and her husband’s job transfer brought them to settle in Indianapolis, Indiana. On December 29th, 1960, Jean gave birth to her beloved son, Jay Brent. She later received a Master’s in English from Butler University with a 4.0 GPA. Jean was a valued French and English teacher at Lawrence Central High School, where she retired after over 25 years. She authored a grant proposal that earned Lawrence Township Schools national recognition, and she was sent to the White House to meet with President Ronald Reagan to receive the award. Among other accomplishments, Jean was the Chief Copy Editor of the Saturday Evening Post. She was also a writer and editor of the Lily Endowment Annual Report. Jean loved English and enjoyed tutoring many students, who became like family to her. If you knew Jean, you knew her greatest accomplishments and true loves were her son Jay, and her granddaughter Annie Noelle. Jean was a wonderful, loving “MeeMaw”, and truly lived for her Annie. Jean leaves behind her son Jay, her treasured granddaughter, Annie, and daughter-in-law, Marianne Hanson.

A memorial for Jean will be held on Friday, November 13th from 3 to 5 p.m. at the Harry Moore Chapel located at Indiana Funeral Care, 8151 Allisonville Road, Indianapolis, Indiana 46250
To order memorial trees or send flowers to the family in memory of Jean Browning Rose, please visit our flower store.