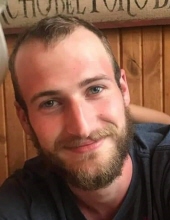 Jason was born on June 1, 1994 in Fort Hood, Texas to Jason Dwayne Godwin and Stephanie Jo Parman. Jason graduated from Lebanon Senior High School. After graduating he enlisted in the United States Air Force and was proud to serve his country. While enlisted Jason married Vanessa and had 2 children, Hayden and Jason. Jason worked in the service industry and built a work family while at Top Golf. Jason enjoyed being around people and making them laugh. His friends and family say he was one of the most genuinely nice guys they have ever met and that his smile could light up a room. He was always willing to help anyone in any way. Jason would reach out to those that were hurting or in need of a shoulder to lean on just to offer support and prayers. He gave the best hugs and his ability to make every person feel special was incredible. His laughter and positive attitude was contagious.

Jason is survived by his father Jason, his wife Vanessa, children Hayden and Jason III, sisters Kelsey, Alexa, Madison and Lauryn, brothers, Gage and Eli, grandmothers Debbie and Tracie, grandfather Tony and many extended family that loved him dearly.

Jason was preceded in death by his mother Stephanie, his grandmother Sheree, grandfather Rodney, great grandmother Mama Shirley, and his aunt, April.

Funeral services will be held at Indiana Funeral Care 8151 Allisonville Rd. Indpls, IN 46250. Viewing will be from 12:00pm-2:00pm. Service officiated by Pastor Steve Kehrer will begin at 2:00pm. Following the service there will be a Celebration of Life Dinner at 4:00pm at the VFW 6525 Lee Rd. Indpls, IN 46236 for all family and friends to join in fellowship remembering the unique and special life of Jason Dwayne Godwin II.
To order memorial trees or send flowers to the family in memory of Jason Dwayne Godwin II, please visit our flower store.