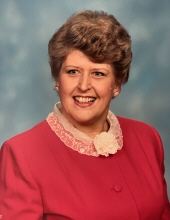 Jane Ellen (Roberts) West, 85, beloved wife, mother, grandmother and great grandmother, went home to be with Jesus on Sunday, November 24th at Hamilton Trace Hospice in Fishers, IN. She was born in Cincinnati, OH on July 29th, 1934 to the late Alma (Niemeyer) Roberts and William J. Roberts.

Jane was raised in Cincinnati and graduated from Western Hills High School and The University of Cincinnati. She married her high school sweetheart, Roger, in 1954 and they began their life together in the Price Hill neighborhood of Cincinnati. She and Roger subsequently lived in Stuttgart, Germany, Livonia, MI, and Port Huron, MI, before settling in Terre Haute, IN and later retiring to Fishers, IN.

There will be a private graveside service at 2pm on December 4th at Spring Grove Cemetery in Cincinnati for family. In lieu of flowers, the family asks that donations be made in Jane’s memory to: Samaritan’s Purse (https://sampur.se/2Y16vWN) or to Britton Falls Choir, memo: In memory of Jane West, 13079 Del Webb Pkwy, Fishers, IN 46037 c/o Olga Hackenberg.

Online condolences may be left at www.indianafuneralcare.com or dwifuneralhome.com.
To order memorial trees or send flowers to the family in memory of Jane Ellen West, please visit our flower store.