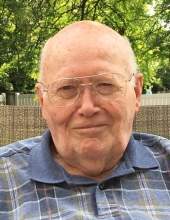 Bill was preceded in death by his loving wife of nearly 25 years, Shirley J. (Dilley) Davis, his parents James & Alta (West) Davis, his sister Doris (and brother-in-law Pat) Loney as well as his great-niece Stephanie Folden.

Bill was born in Indianapolis in his home on Elder St. He attended George Washington H.S. He lived and worked in Indianapolis his entire life. Bill was a salesman for many years with A.B. Young & Co. selling industrial boilers. Later, he worked for Plumbers Supply and then Bowers Envelope.

Bill loved spending time with his daughters. He was an excellent bowler playing in many leagues and tournaments but also making sure his kids knew how to bowl. He took them bowling often and signed them up for leagues of their own. Bill is fondly remembered by his daughters for taking them to several sweetheart dances as they were all members of the Brownies or Girl Scouts. Bill took his daughters to fly airplanes he built in his garage, fishing, and to work with him as often as he could. Bill would often bring home a brown bag with each of his daughter’s favorite candy and a sweetheart roll for their mom. In his later life, Bill loved to browse the hardware stores even if he only walked out with a box of Cinnamon Toast Crunch. Terri’s fondest memory is that he didn’t throw away her beloved “blankie” even though she told him she no longer needed it as she was about to enter kindergarten. Janet was truly blessed that she shared a birthday with Dad. As they got older, they spent their birthday together at a unique restaurant or diner. Kathy will never forget her and Dad’s canoe trip down Blue River behind Grandma Diesh and Erv’s house. Dad bought her a roll of Lifesaver’s to enjoy on the trip. Isn’t that ironic? Lisa’s favorite memory is building stilts with Dad and him teaching her how to use them. She also loved hanging out in the garage with Dad and our neighbor, Bob. Dianne’s most beloved memory is of the conversations and quiet moments with Dad on the front porch bench. It was green then to match the shutters on the house but is burgundy now to match the shutters on her own home across the street. One thing is for certain, Dad never let us down.

Bill was loved by many and made friends easily. He loved to just be silly and have fun. He enjoyed westerns and detective shows on tv and he loved word search puzzles. He spent some time on Facebook and always added a sweet comment, shared a video clip of some music he enjoyed or of a cute animal.

Bill lived at Rosegate Assisted Living the past two years. He was known as “the bird man” there because of his love for the resident bird. He even did a couple of commercials for ASC and was interviewed by Patty Spitler. He became especially close to a few people at Rosegate, and his memory will remain there in the form of his fish, Blue.

Funeral services will be private.

In lieu of flowers, memorial contributions may be made to the American Cancer Society (www.cancer.org) or the Alzheimer’s Association (www.alz.org).
To order memorial trees or send flowers to the family in memory of James William Davis, please visit our flower store.