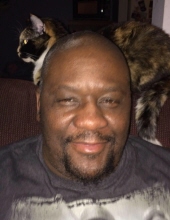 He is survived by his two children; James Thomas Borum Jr and Chaney Borum, and mother of his children Melissa Antonetty as well as his two cats; TomCat and Misty, and many other family members.

He was born in Covington, Tennessee on May 23, 1964. Always being an independent hard worker, he put effort into work and the things close to his heart. A dedicated loving father, he did all he could to support and provide for his children. His heart was often worn on his sleeve, having compassion and laughs for those around him. His awful jokes and sense of humor effortlessly brightened up your day.

The joy he brought into our lives will live on forever.
To order memorial trees or send flowers to the family in memory of James Thomas Borum, please visit our flower store.