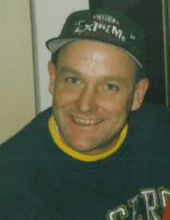 James Harlan Davis passed on April 23, 2022, at the age of 60 in Indianapolis from natural causes. Jim was born on May 18th, 1961, in Indianapolis. He was a graduate from North Central High School in 1979. He received printing technical certification from the C9 program and spent over 25 years in the industry. He was a well-known local pressman. Jim had many happy childhood memories at his grandparent’s country home, where he developed his love and appreciation for the great outdoors. He continued that love throughout his life, where he enjoyed fishing, 4-wheel vehicles, and wild animals! Most recently—his pet turtle. His biggest gift was walking into any room with a smile and his infectious laugh.

Jim was the proud father to two children whom he also shared his love for the outdoors. They continued to bond throughout later years through teenage car repairs. Jim also really enjoyed family gatherings and celebrations. Jim is survived by his son, William Davis, his daughter, Holly Davis, only grandchild, Charles Edwards, his mother, Doris (Lewis) Offutt, his siblings John Davis (Kathy), Dana Meyer (Jeff), his stepsister, Jennifer Toth. Many will fondly remember him as Uncle Jim. He is also survived by his friend for life, Christine Davis, (Robert Kowich). He is preceded in death by his father, Earl Davis, his stepfather, Frederick Offutt, and his stepsister Kathryn Rose Duca (Dave). In leu of flowers or contribution, donations can be made to your local Salvation Army or The Wheeler Mission. A memorial celebration is being planned by the family and will take place at a later date.
To order memorial trees or send flowers to the family in memory of James H. Davis, please visit our flower store.