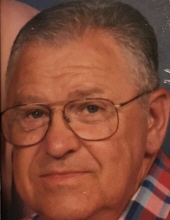 James "Shorty" Franklin Gray, 77, of Edinburgh, IN passed away at 1:27 PM Monday, June 28th 2021 at his home with his family by his side. He was born August 23rd, 1943 in Sullivan, IN to Pauline (Blakeman) Gray and George William Gray. He married his highschool sweetheart Margie Rose (Case) Gray on July 29th, 1961. They moved to Columbus, Indiana where he began his work at Cummins Engine Co for over two decades and retired from Amtrak as a machinist.

He was a member of Masonic Lodge #150, Moose Lodge #398, and St. George Lutheran Church. His favorite hobbies were woodworking, camping, fishing, spending time with his friends and family, and lounging around with his grand-dog, Buddy.

He was a husband, father, grandfather, and friend to many. He will enter into the gates of Heaven to all of those who missed him saying, "Job well done, Jim Gray, job well done!"
To order memorial trees or send flowers to the family in memory of James Franklin Gray, please visit our flower store.