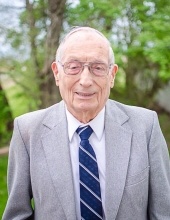 James (Jim) Francis King of Indianapolis, IN entered into heaven’s glory on July 31st, 2020 and was united with his Lord and Savior Jesus Christ and his wife of 58 years, Patricia Lois King. He was 91 years old.

He was raised in Henning, IL where he graduated high school, and after high school went to college at the University of Illinois where he studied Geology, Aviation, and Aviation Mechanics. After college, he answered his country’s call and entered the US Army and served in the Korean War. He also served in the Air Force Reserve.

While in high school he met the love of his life that would later also become his wife, Patricia Lois Smith of Bismarck, IL. They were married September 9th, 1953.

Jim worked his entire career for the US Government and worked at Chanute Air Force Base in Rantoul, IL as an instructor on the Minuteman Missile. Later, he worked at Fort Benjamin Harrison, Indianapolis IN, as a writer and instructor for the US Army.

Jim had a lifetime love of aviation and passed it on to his family. He was a charter member of the Experimental Aircraft Association Rantoul, IL Chapter 29 and served as its second president.

He was a charter member of Cornerstone Baptist Church and served many years as a trustee.

Jim is preceded in death by his wife Patricia Lois King, and his parents Francis Benjamin King and Edna Mae Lenox King.

He is survived by his children David (Penney) King, Christy (Mike) Chilson, Daniel (Janice) King, and Amy (Bill) Reneau. He has 20 grandchildren and 28 great grandchildren.

Burial will be at Washington Park Cemetery East immediately following.
To order memorial trees or send flowers to the family in memory of James F. King, please visit our flower store.