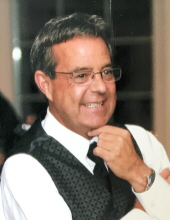 James Edwin Krier was born September 28, 1952 in Indianapolis, Indiana, the fourth of Bill and Betty Krier's 11 children. Before he died on September 11, 2020, he had only one request of whomever eulogized him or wrote his obituary: "Make it funny." Jim lived to bring joy to others, often leaving them laughing so convulsively they could barely stop, breathe, wipe the tears from their eyes and then go on to laugh some more.

Jim loved the holidays and used pretty much all of them as a stage. As a child, he grew up routinely joining with his brothers in booby-trapping the entire family home on April Fool's Day. On Halloween even his mother joined the proceedings and encouraged her children to trick up the house, complete with a freaky, Grandpa in the attic and live goblins all over the place. Dressed as another spook, Jim once played the organ in the living room while an actual coffin lurked in one of the bedrooms. After the Kriers' Haunted House had gained a reputation of drawing about 400 trick-or-treaters each year, Flanner Buchanan Mortuary donated an old coffin to the cause. Since there was already one casket positioned in the living room (Betty Krier's cedar chest, with one of the smaller kids inside), Jim decided that the true coffin should be decorated with the Christmas stockings of all the family's dead dogs--and the stockings of in-laws who were no longer married to family members. And, of course, Jim was known to participate in the brothers' favorite trick: waiting on the roof as some visitors, usually the teenagers, exited the house and shooting them with squirt guns filled with a liquid that left the individuals smelling as if they had just passed gas. Jim cherished this effect and even owned his own remote-controlled machine that could simulate the sound of flatulence. It made appearances at hospitals both when Jim was a patient or visited others there, often surprising nurses when they would enter a hospital room's bathroom.

Jim also owned his own, professional Santa suit. And for many years Santa Jim would appear on Christmas Eve at the homes of his brothers, sisters and close friends, so that their children could come to a window and catch a glimpse of the Jolly Old Elf and watch him jingle his bells as he left their houses. Several years, Jim was recruited to perform as Santa for the children enrolled in religious education classes at Christ the King Catholic Church. Santa enthralled the students, as did Mrs. Santa/Santa's elf portrayed by Jim's son Jimmy, dressed in his own grandmother's finest.

Any holiday, any event, any object could become part of Jim's relentless carnival. For instance, while in the Army during the War in Vietnam, Jim was stationed in Oahu, Hawaii, very near the Pacific. He worked as a cook and quickly became a self-taught garnishing master, turning carrots into race cars and other toys for his fellow service members to take home to their children.

Back in Indianapolis, even something as innocuous as a small vial of high potency, therapeutic garlic oil was deployed for one of his notorious pranks. Jim was a salesman at Butler Toyota at the time (and known throughout his adult life as a terrific salesman, with many customers coming back specifically to work with him; he once even passed out his calling cards in an Emergency Room where he was being treated for a severe hand cut). At Butler Toyota, Jim noticed a fellow salesman's tendency to steal his pens. So while the two were on a break, Jim placed one of his own pens on an ash can, a pen that had a few drops of the garlic oil inside the cap. As expected, the other salesman picked up the pen, placed it in his shirt pocket and quickly reeked of garlic. He accused Jim of somehow spraying him with the odor, but Jim rightly claimed he did not. Eventually the dealership showroom stunk so intensely that the big doors used for moving cars inside had to be opened to air the place out. But that wasn't the end of Jim and the garlic oil. It went on to make a lasting impression inside a Porta Potty, parked in the front yard of the home of one of Jim's sisters while road repair was being done. Jim simply put a sign on the Porta Potty that read "Italian Food" and tossed a little of the garlic oil inside.

With Jim, inspired silliness and outright joy were the keys wherever he went. They drove his life. Even when his health wasn’t the best, he still made jokes, he still entertained his family and friends and he never complained. He loved everyone and was deeply loved in return. Thank you, Jim, for all the fun and happiness you brought to those who were blessed to have known you.

Jim is survived by his son Jimmy Krier and daughter-in-law Shannon Lothamer-Krier and also by his ex-wife Patricia Miller (son Michael Miller), with whom Jim had a lifelong friendship; his sisters Beth Ann Krier, Mary (Bryan) Clayton, Annie Krier-Drake, Suzanne Hewitt and Carolyn Friedman; his brothers Bill Krier, George (Connie) Krier, John (Kim) Krier and Tom (Pam) Krier and tons of cousins, nieces, nephews and little old ladies who were hoping Jim would one day become their next husband.

Jim was preceded in death by his parents Bill and Betty Krier, by his brother Joe Krier and his sister-in-law Barb Krier. A private memorial gathering is planned for September 28, 2020, Jim's birthday. Anyone wishing to make a donation in Jim's memory is invited to do so at The Humane Society of Indianapolis or @indyhumane.org
To order memorial trees or send flowers to the family in memory of James Edwin Krier, please visit our flower store.