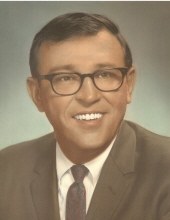 Jack N. Worland, 90, passed away Thursday, October 08, 2020 at Homeview Health and Rehabilitation Center, Franklin, Indiana. Born on April 15, 1930, in Shelbyville, Indiana, he was the son of the late H. Paul and Emily (Neu) Worland. He married Betty L. Cole on September 28, 1951. She preceded him in death on April 8, 2019. Jack always sought to be a positive influence to his family by his continual encouragements to pursue the desires of our heart.

His most cherished career accomplishment came when he was appointed Director of Defensive Driving by former Commissioner Ralph VanNatta of the Indiana Bureau of Motor Vehicles. Following his years with the BMV, Jack served as President of the Jack Worland Professional Driving Improvement Courses. Inc. During this time he served as a member of the National Safety Council where he was recognized with numerous awards including the instructor of the year.

A private graveside service will be held at Forest Hill Cemetery officiated by his son. In lieu of flowers, memorial contributions may be made to the Shelby County United Fund, 126 North Harrison Street, Shelbyville, Indiana, 46176.
To order memorial trees or send flowers to the family in memory of Jack N. Worland, please visit our flower store.