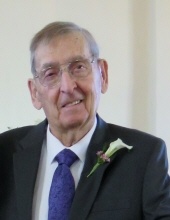 Herbert Wayne Knotts, 87, passed away on the morning of Monday, November 23, 2020 of natural causes. He was born in Palestine, Illinois on February 21, 1933 to the late Jonathan Edward Knotts and Olive May (Brown) Knotts. His proudest accomplishment was his 62-year marriage to his surviving wife Janet (Bolenbaugh) Knotts on October 11, 1958.

Wayne was a proud United States Air Force veteran. He had a great love of history, genealogy and collectibles. His interesting finds of coins, stamps, books, antique tools and furniture could always be found displayed throughout the house.

Wayne is also survived by his youngest brother Phillip Knotts of Zionsville, Indiana. He was proceeded in death by his siblings: Darlene (Knotts) Williams and John “Jack” Knotts.

In lieu of flowers, the family requests donations be made to the American Heart Association.

Visitation will be held at Indiana Funeral Care located at 8151 Allisonville Rd. Indianapolis, IN 46250 on Saturday, December 5 at 11 AM with a memorial service to follow from 12PM to 1PM.

Due to Covid-19, the memorial service will be limited to 40 attendees.
To order memorial trees or send flowers to the family in memory of Herbert Wayne Knotts, please visit our flower store.