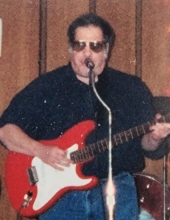 Harold Land, 70, of Indianapolis Indiana, passed away peacefully on April 22, 2022. He was born on February 23, 1952 in Johnson County, Indiana to parents Dallas and Oma (Root) Land.

On May 30, 1980, Harold married the love of his life Alberta Purdy. They shared 32 years together and raised three beautiful children Dallas, Linda, and Amber. Alberta passed away in 2012.

Harold was very passionate about music. He loved to sing and play his guitar. He was in a country music band alongside his brother in law and multiple other band mates for several years. He also wrote and performed some of his own songs.

As he grew older, he found a passion for Christianity. Bluff Baptist church and the community was like a second family to him. He was very well known and loved through out the Indy area, as he visited many churches and performed for their congregation. He also volunteered his time going around to nursing homes once a month and singing for the residents.

Harold was a vibrant soul. He was humble and gracious for everything that came into his life. He was so loving and had a heart of gold. He loved spending time with his children, grandchildren, and family.

Harold is preceded in death by his parents Dallas and Oma Land, his brother Jerald Land, his sister Cathy Miller, and his loving wife Alberta Land.

Visitation will be held on April 27, 2022 at Indiana funeral care from 10am - 12pm. His funeral service will begin at 12pm. Harold will be laid to rest at Floral Park Cemetery.

In lieu of flowers, please make memorial contributions to the family.

To order memorial trees or send flowers to the family in memory of Harold Land, please visit our flower store.