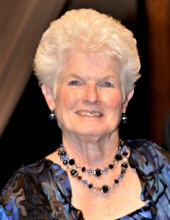 Gloria Deane Kennard was born on September 18, 1931 at the Fall Creek St. Vincent Hospital in Indianapolis, the youngest of five and only daughter of Alvin Louis Kennard and Mable Katherine Grimes Kennard. She died on August 9, 2021 at Ascension St. Vincent Heart Hospital in Carmel, Indiana at the age of 89 years, 10 months, and 22 days, just five weeks short of her 90th birthday.

She graduated from Broad Ripple High School in the class of 1949. She attended Indiana Business College for 1 year. She was married to Paul Namy on June 28, 1952. To this union were born five children; Marleah, Keith, Karen, Beth and Karl. She held several jobs including E. B. Brown Furniture and Love Furniture Galleries. She also worked as a church secretary, cleaning homes, served as a nanny, and a church custodian right here at Faith Church. But her primary and most important career was as a homemaker and mother to her five children. She lived in Indianapolis, Broad Ripple, Carmel, and Brownsburg in Indiana; Tacoma, Washington; Chesterton, Maryland; and back to Carmel and Westfield in Indiana.

In early adolescence Gloria became aware of her need for the forgiveness of sin and heard the Good News that we are “saved by His grace through faith… that salvation was a gift.” She responded to that call to trust in Jesus Christ and took that seriously for more than 75 years since then. Gloria was active at Hope Church (Indianapolis) and for many years gave leadership to Hope Church reunions. She was also active at Bethesda Baptist (Brownsburg), Faith Missionary Church (Indianapolis), Temple Baptist (Washington state), 4th Presbyterian Church (Bethesda, Maryland), College Park Church (Carmel), and since 2004, back to Faith Church (Indianapolis). Gloria was deeply committed to the church and the work of the Gospel at home and around the world in support of missions. She was a meticulous cleaner and organizer. She enjoyed doing garage sales and helping others with theirs. She enjoyed Scrabble, crossword puzzles and playing the Accordion.

Gloria was preceded in death by her parents; her four brothers – Russell, Robert, Alvin and Kenneth Kennard, her first husband, Paul; and her second husband, Forrest.

Funeral Services will be held Friday, August 13 at 11:00 a.m. at Faith Church, 9125 North College, Ave., Indianapolis, IN; Visitation preceding service from 9:30 a.m. Interment at Lincoln Memory Gardens in Whitestown, IN. In lieu of flowers, Memorials designated to Faith Church missions.