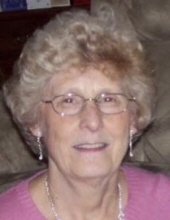 Gladys Fluty, 79 years old, went to be with her Savior Jesus Christ on Sunday, August 16, 2020. As Gladys was leaving this world her two daughters were at her side
and her two favorite care givers, Stephanie and Darlene.

She spent most of her life living in Indianapolis and at the time of her passing Gladys was residing at Brookdale Assisted Living in Carmel, IN.

Gladys worked as a factory worker most of her working career and her last place of employment was at Carmel Lutheran Church with her late husband in housekeeping maintenance.

Throughout the years Gladys enjoyed teaching Sunday School and attending church with her family. She attended Mt. Zion General Baptist Church in Indianapolis for many years. Her last church home was Mt. Calvary Evangelistic Center in Indianapolis.

Gladys and her late husband were married for 63 years. She was preceded in death by her husband J.E. Fluty, Her parents D.L. Whitney and Minnie Lula, and her brother William Whitney. She Is survived by her two daughters Theresa (Fluty) Roller (Tim) and Rita (Fluty) Gee and husband Ron of Indianapolis. Also, four grandchildren. Joshua Clements, Robbie Gee, Rodney Gee and Kyla Mapalad all of Indianapolis and four great grandchildren, Vanessa, Addison, J.J. and Ruby.
To order memorial trees or send flowers to the family in memory of Gladys Fluty, please visit our flower store.