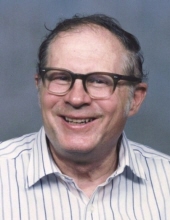 Gilbert is survived by his children, Dawn Truax (Victor), Gary (Carrie), and Keith (Amie), and two foster children, Julia and Richie and his beloved wife, Donna. He has eleven (11) grandchildren and five (5) great-grandchildren. He is preceded in death by his son Marc.

Gilbert was born on February 21, 1930 in Jacksonsville, Florida to Gilbert L. and Elizabeth Scott. He was drafted to the Army where he served as a radio operator in the Korean War until 1954. He graduated from Depauw University in 1952 with a degree in Economics. He married Donna Van Dyke on February 21, 1962 after meeting at work and discovering a mutual love for swing dancing. Gilbert’s quiet nature and intelligence made him a natural for engineering work. He began working for RCA in 1952 as a Quality Control Engineer. In 1977, he was transferred to Indiana to continue his work with RCA in the Consumer Electronics Division. In 1998, Gilbert left RCA to work at Roche Diagnostics as a Reliability and Validation Engineer until his retirement in 2003. As part of his work at Roche he helped with design quality for glucose meters.

He was an active and dedicated member of the Apostolic Bible Church and the American Legion.

A graveside service is scheduled at 11 a.m. on Monday, August 17 at Lincoln Memory Gardens (Whitestown).
To order memorial trees or send flowers to the family in memory of Gilbert L. Scott, please visit our flower store.