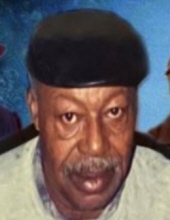 George W. Dowdy Jr., also known as “Junior”, was born on January 14,1935 in Cumberland City, Tennessee to Mary A. Dowdy and George Dowdy Sr. He was the 5th born child of eleven children. The Dowdy family moved to Indianapolis in the 1950’s.

George served in the United States Air Force during the Korean War. He was also a 32nd Degree Mason with membership at Masonic Lodge 66 of Indianapolis. As owner of “Dowdy’s Construction Company”, his work helped build small businesses in the Indianapolis community and throughout the state of Indiana.

George had professed Christianity as his belief. He enjoyed traveling, riding his motorcycle, and the company of his family and friends. On the weekends after a hard work week, George would dress in stylish hats and “Superfly” attire, jump in his convertible Cadillac and rollout. In his own right, he was a “teacher of life” and would articulate the truth of life as we have witnessed as a nation just recently, giving advice on how to circumvent as a black man to survive. George was a “Doer”. He purchased a home on Sutherland Ave.,renovated it, and exclaimed that it will be the area of future economic growth. He was right!

George passed this life on July 1, 2020. George was preceded in death by his parents, eight siblings,two children: Linda Dowdy and Derek Dowdy. He leaves to cherish his memory with Mrs. Kathleen (Anthony) King of Derby, Kansas, Mrs. Patricia (Damon) Hall of Carmel,In., Donna Branham (George) his brothers: James and Glen, along with a host of grandchildren, great grandchildren, nieces, nephews, family and friends.
To order memorial trees or send flowers to the family in memory of George W Dowdy Jr., please visit our flower store.