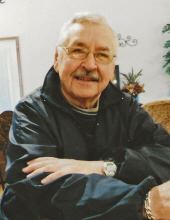 Fred L. Baker of South Bend, died peacefully on Saturday, July 11th, at Brookdale of Granger Senior Living. Fred was born March 17, 1931, in Mishawaka, Indiana, to Fred L. and Francis (Sieradzki) Baker. He married Lucille (Muszynski) Baker on June 2, 1956, in South Bend, Indiana. Fred is survived by his wife Lucille and sons, William and Robert Baker of Indianapolis, Indiana. His daughter Bonnie Baker Vollmer preceded him in death on May 17th of this year. Fred’s son-in-law Joseph Vollmer of Indianapolis Indiana, grandchildren Patrick Vollmer of Bloomington, Indiana, and Allison Vollmer of Chicago, Illinois, also survive. A Mass with Christian burial will be held at 10:00 a.m. on August 1st at St. Simon the Apostle Catholic Church in Indianapolis, Indiana. Following the Mass, burial will be at Our Lady of Peace Cemetery in Indianapolis, Indiana.

Fred graduated from Mishawaka High School in 1950. After working for a short time, he served in the U. S. Army and was stationed in Germany during the Korean War. After 35 years of service, he retired after working as a printer for Bendix/Allied Signal Corporation. Fred enjoyed sports, history and spending time with family and friends. He and Lu made many friends while attending Marian High School sporting and social events, some of the friendships lasting a lifetime. Fred enjoyed a long retirement that allowed him to spend time traveling and visiting grandchildren, friends, and family. Fred and Lu attended Mishawaka Alumni meetings and enjoyed their friends at Angelo’s Restaurant.

Fred had a talent for art and a great sense of humor with regard to his art. As time went on, he was a great source of local history with regard to Mishawaka, Indiana, where he grew up and spent most of his life. He attended Mary Phillips and St. Monica’s School. To Fred, his family was everything and he passed on a strong sense of commitment and faith.

The entire Baker family would like to thank the staff of Brookdale Senior Living as well as Heart to Heart Hospice for all the care and kindness they provided Fred and the family.
To order memorial trees or send flowers to the family in memory of Fred Baker, please visit our flower store.