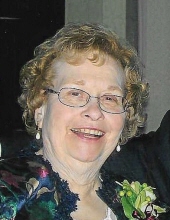 Frances “Frankie” Knapp Roberts, 86, of Carmel, Indiana, entered into the glorious presence of Jesus on February 15, 2022. She was a beloved wife, mother, grandmother, great grandmother, aunt, sister, and friend.

Frankie was born on November 29, 1935, to Frank Marion Knapp and Besse Peavey Knapp in Marion, Ohio. She was the youngest of five sisters who have all preceded her in death. (Leslie Jean Fortiner, Elsie Jane Mayes, Marjorie Ann Lutz, Peggy DeHaan Moyle). Her given name was Frances, but the family nicknamed her Frankie as an infant after her beloved father, and she was adamant throughout her life until her passing that she preferred Frankie.

Frankie met Jack Richard Roberts while they both were attending Harding High School in Marion, Ohio and the two quickly fell in love. After high school, Frankie went to Denison University while Jack went to The Ohio State University. Prior to his entry into the U.S. Army, they professed their love to one another before the Lord and married on September 9, 1956, and they quickly settled into family life. Jack and Frankie were blessed with three children hoping one of them would be amazingly normal. They have five grandchildren which are grand just like their grandparents and four great grandchildren which continue the grand legacy. Frankie loved dancing, socializing, dinner parties and great desserts. The children from an early age have fond memories of their parents dancing gracefully across the dance floor with her flowing dresses and gowns.
Frankie is survived by her beloved spouse of 65 years, Jack Richard Roberts, who greatly misses his cherished wife. She is also survived by her three children, Roxanne Roberts Bush (Floyd Eric Bush preceded in death 2015), Jack Richard Roberts Jr, Roben Roberts Trout (David); 5 grandchildren, Adam Bush (Laura), Heather Bush Wong (Jeff), Matt Bush, Ava Trout, Harper Trout; and 4 great grandchildren, Nathan Bush, Virginia Bush, Adalyn Wong, and Preston Wong. Her children, grandchildren and great grandchildren were a blessing in her life.

Frankie was proud of her membership with the Daughters of American Revolution along with her service to Marion Junior Service Guild, Marion Garden Club, and PTO’s. She was a devout Christian and enjoyed attended numerous church events, mission trips, and bible studies. She was a faithful follower of her Lord and Savior Jesus Christ and though the family mourns, they rejoice as she is finally home, and we will be reunited again through our faith in Jesus.

Visitation and services will be held at Colonial Hills Baptist Church, 8140 Union Chapel Rd
Indianapolis, IN 46240, on Monday, February 28, 2022, with Pastor Charles Phelps and Pastor Bob Taylor officiating. Visitation will be held at 1:00 p.m. followed by services at 2:00 p.m. and then internment at Union Chapel Cemetery. In lieu of flowers, the family prefers donations be made in Frankie’s honor to Colonial Hills Baptist Church Missionary Fund.

To order memorial trees or send flowers to the family in memory of Frankie Knapp Roberts, please visit our flower store.