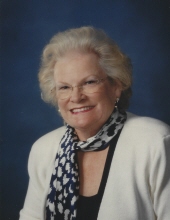 Emily Campbell Nickel went to be with the Lord on January 8, 2021 surrounded by family. She was born on April 2, 1930 to Mary Elizabeth Lacy Campbell and Wallace V. Campbell in Mansfield, OH.
Emily grew up in Mansfield, attended Christian College in Missouri, and graduated as a Journalism major from the University of Kentucky. She was an avid Wildcat fan, who bled blue and never missed a chance to cheer on the CATS. Her parents moved to Versailles, KY when she was 18 and she claimed Kentucky as her own for the rest of her life. She loved Kentucky and leaves many cousins behind in the Bluegrass state.
She married Wilbur Carl (Nick) Nickel on May 20, 1952 and they were soulmates and golf and bridge partners for 67 years until Nick passed in 2019. They had 2 daughters, Ann Catherine Schuck (Larry), and Amy Louise Lippard (Jim).
Emily was predeceased by her husband, daughter Ann, son in law Larry Schuck, and brother Wallace Campbell Jr.
Emily was a delightful social person. People remember her as always dressed to the nines, with jewelry and coordinating hat and shoes. She was a member of Stansfield Circle; PEO; Questers; Southern Club; The International Flow Blue Club; Woodland Country Club Carmel, IN; Eagle Creek Country Club Naples, FL and St. Luke’s United Methodist Church. She loved to play golf and had a hole in one at Woodland Country Club when she was 70! She was an avid bridge player, participating in several different bridge clubs.
Nick worked for Elanco, then a division of Eli Lilly, and Emily was the consummate hostess. Nick and Emily hosted many corporate sales events nationwide, customers for the Indy 500 and were especially known for their 500 parties as well as annual Kentucky derby parties.
Emily founded Nickel Interiors in 1985 and was an Allied member of ASID. She and her daughter Amy grew the business and participated in 23 annual St. Margaret’s Guild Decorator Showhouses winning two Key awards and a People’s Choice award.
She was an incredibly talented designer and transformed many homes over the years. Her grandchildren were the light of her life. Emily (Gobba) and Nick spent vacations at their Marco Island condominium every year with Sarah Schuck Austin (Suzanne), Greg Schuck (Kate), Michael Lippard (Katie), and Emily Lippard Knerr (Eric). She was so proud to become a great grandmother to Erickson Knerr in January of 2019.
Everyone remembers Emily as welcoming, loving, talented, and loyal. She welcomed into the family the friends of her children and grandchildren. Nick and Emily taught their girls how to play bridge, then the sons in law, the grandchildren and even the grandchildren’s friends.
The family would like to thank the wonderful people that work at The Forum at the Crossing for their love and care. They would also like to thank their loyal and dedicated aide, Kim Buckhalter, for her tireless care the last 18 months. Emily is now with many family and friends of her 90 wonderful years. We are sure she will make every bridge contract she bids, finally make that 2nd hole in one and toast those left behind with plentiful bourbon and wine. She will be missed dearly.
In lieu of flowers, memorial contributions may be made to Stansfield Circle, 5289 Arapaho Ct. Carmel, IN 46033, or to your favorite charity.
Her celebration of life service will take place on Saturday, February 20, 2021 at 11am at St. Luke’s United Methodist Church. It will be streamed live for those unable to attend at stlukesumc.com/live.
To order memorial trees or send flowers to the family in memory of Emily Campbell Nickel, please visit our flower store.