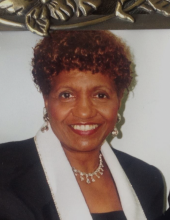 Elizabeth Lorene Meyers was born August 9, 1935 in Indianapolis, Indiana. She is the daughter of the late Marion and Carson Coleman Sr. She had three brothers who proceeded her in death: Carson Jr, Steven, and Michael; and two sisters: Barbara and Phyllis.
On May 9th 1994 she married the love of her life Wendell Meyers who loved her dearly. On their recent anniversary Elizabeth was at rehab; however, nothin stopped her son and husband to make her smile with flowers and cards and a special happy anniversary.
Elizabeth resided all her life in Indianapolis, Indiana, retiring from years of work at RCA and later working at the Children's Bureau, a part time job that allowed her to continue the work she loved most! Working for Jehovah, as she would say, "He is the best employer ever." Elizabeth pioneered for 27 years, even during her sickness. Her fondest memories and blessings were going to pioneer school four times, helping many learn about Jehovah and serving God with family and friends.
Elizabeth was known for always wanting to coordinate family and friends for a good time, some still speak of it. Not only was she known as Elizabeth, but family and close friends called her Tuts. A nurse named her that at birth and that became her nickname; also Liz, Aunt Tuts, and mommie were pet names she was called.
Throughout her sickness Elizabeth learned quickly to use a tablet and search the internet with ease. So YouTube became her therapy as the cooking shows took her to a new level. Family and friends always enjoyed the fruits of her labor! Most of all the computer helped her keep her spiritual routine and gain confidence and courage. Many loved sister Elizabeth Meyers, she attended four congregations namely The Old Grandview, Riverside, Forest-Manor, Arlington Heights, and her recent congregation Washington Park.
Elizabeth's favorite saying always was, "When I wake up from sleep in death I want to see all my family and friends, it's like being on a train in the back on the caboose, waiting to get to the destination."
She leaves behind six children: Sharron Johnson, Virgil Colbert, Victoria Smith, Michael Colbert, Thomas Robertson, and Sara Smith; 8 grandchildren; 12 great-grandchildren; and 3 great-great-grandchildren.
To order memorial trees or send flowers to the family in memory of Elizabeth Lorene Meyers, please visit our flower store.