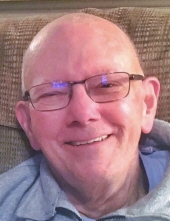 Edward Joseph Benz, Jr., of Fishers, Indiana, shared a beer with his youngest daughter Dorothy and peacefully fell into his final sleep on September 24, 2020.

Born October 25, 1938, in St. Louis, Missouri, he was known as "Butch" to his father Ed Sr., and mother, Henrietta. He learned from them honor and valor and all the other things he would need to become the exemplary human he was. He also learned a sense of practical frugality. His dad spent a weekend with Butch and his younger brother Wayne painting the family Packard with cotton balls to "get a smooth finish at a reasonable cost." This exercise instilled a sense of DIY that Ed would carry throughout his life and pass on to his own children as they grew, spending countless hours with them in the garage tinkering with one thing or another. However, he picked up a little bit of mischief along the way, too. One day on the way home from school, Butch talked Wayne into pretending to be blind, only to lead his younger brother directly into a telephone pole, putting a huge knot on Wayne's forehead.

As he grew older, Ed was a member of the Maplewood/Richmond Heights High School varsity football, baseball, and track teams. His sister Diane remembers how she loved the fall Friday football nights when the whole family would walk to the high school to watch her big brother make great plays and have his name ring out on the loudspeaker. His football proficiency earned him a scholarship to Ohio University. He would later pick up golf, softball, and both coaching and playing soccer.

After Ohio University, Ed enlisted in the Air Force, serving his country honorably. However, never let it be said that Ed Benz let six years go by without having a lot of fun. In fact, his youngest sister Penny remembers many “on leave” weekends with fellow airmen gathered around the family dinner table. Clearly, Ed never forgot this lesson of hospitality. His six years of service also made Ed a larger than life hero to the youngest of his twelve grandchildren. She loves to brag about her grandpa, "the veteran". And, in turn, one of Ed's proudest moments was to stand with her other grandpa at her grade school's Veteran's Day Ceremony last year.

On New Year's Eve, 1965, Ed married the true love of his life, Marilyn Margot Harder, or “Maggie” to him. Ed was so certain that she was the one, that he presented her with a lovely engagement ring after courting her for only one week. They were married on May 7, 1966, with his brother Wayne and one of his football teammates standing up with him. Ed and Maggie would spend the next 2,844 weeks of their lives together; vowing to live "Always in Christ".

Their daughter Elizabeth was soon followed by two sons, Edward "Joe" Benz, III and David. About this time, Ed passed the CPA exam and began his first career as an accountant. He was perfectly suited to be an excellent controller: methodical, organized, disciplined, and above reproach. These attributes translated into his weekly duty of grocery shopping. Every Saturday, after coaching his kids' soccer teams, he would make a list; and then, aided by one lucky child, he would systematically walk up and down each aisle, selecting the items on his list, and only the item on the list. However, the lucky child was allowed to put one “special” extra item into the cart as a treat! He knew the total cost, after crediting his coupons, accounting for any special items grabbed along the way and was always correct within a quarter of the total, astounding many cashiers.

In the mid-70's, while everyone else was experimenting with disco and sitting in long gas lines, Ed was experimenting with an ill-chosen mustache and sitting in even longer adoption lines. He and Maggie added two more to the growing brood: an infant and a young lady from Vietnam, Dorothy and Kate, as they would be named. With a larger family, and despite those long lines at the gas stations, Ed brought a Chevy Suburban, something that would become synonymous with him as he drove that car nearly every day for the next two decades. He proved that he had learned the lesson of frugality all those years earlier from his father by selling the Suburban to a towing company for an amount roughly equal to what he had paid for the car 20 years earlier. By the time Ed parted ways with that car, he had shaved the mustache, and with Maggie by his side, moved to Carmel, Indiana, added another son Jeremy, made thousands of breakfasts every single morning, and proudly done the myriad of things a couple committed to living together "Always in Christ" do to raise a family.

When he finished his first career, he rested for about two weeks; then began another career that he truly loved because it allowed him to spend hours driving all over Indiana, often with his dog by his side, meeting lots of new people. He became a real estate appraiser. The appraising gave him time for his many avocations, especially being a companion to older, lonely dogs: Schatzi, Fritz, Max, Maxine, and Nancy. Most recently, Ed was a foster dad to Breckenridge, a giant Labradoodle that would lay at his feet for hours and hours and sticking to him like Velcro. He also loved learning more about the Fishers Fire, Police, and Government departments. He became President of the Police Alumni Group, drove the Fire Rescue Van, and cooked a lot of hot dogs for their scholarship drives. He loved fishing, golf, cheering for college football teams, especially Army and Auburn, and reading lots and lots and lots of books. He loved listening to Frank Sinatra and approached everything in life with passionate fervor and unwavering dedication.

Ed had a third profession of sorts; he was a teacher. He was always sharing his wealth of knowledge and wisdom with his children. From how to change a tire to how to make a killer pancake, Ed had a truly tender patience he called upon when his children wanted to learn from him. And when he wasn't telling a joke or reciting a poem about a man from Timbuktu, he was sharing pearls of wisdom like "If you have to think about an action longer than a second or two, you probably ought not to do it" and "Stop lights timed for 35 mph are also timed for 70 mph". Recently Ed was heard to say, "The only way to avoid death is not to have been born at all and I've had way too much fun to want that". He told us he was prepared to go home to his Heavenly Father; and as he was taught by his parents all those years ago, he approached this too with honor and valor. With that final drink he shared with his daughter before he went to sleep, Ed possessed a quiet stoicism intended to reassure his wife, his six children, twelve grandchildren, five great-grandchildren, his brother, his sisters, and his countless friends that life indeed would continue despite his absence, with all of us having our own lives enriched for having known him.

Ed lived his life "Always in Christ" to constantly remind us to love the Lord, to never give up, to love richly, to be kind, to call out injustice wherever it exists; but above all, to recognize the richness in life despite any particular circumstance or surrounding. We can begin to show our love and gratitude for Ed; but we, his family, would be honored to share an afternoon of fellowship on Sunday, October 11, 2020, at Saxony Hall, 13362 Pennington Road, Fishers, Indiana, 46037 from 3 p.m. until 5 p.m. There will be a brief informal service either in person or over Zoom at 5 p.m. To participate by Zoom: https://tinyurl.com/EdJBenzJr-Gathering

In lieu of flowers, the family would ask those wishing to honor Ed to consider making a donation with the Fishers Fire Foundation, the Fishers Police Foundation or the Indiana Humane Society.
To order memorial trees or send flowers to the family in memory of Edward Joseph Benz, Jr., please visit our flower store.